The "Autism" Community Is Not The Autistic Community

The "Autism" Community Is Not The Autistic Community 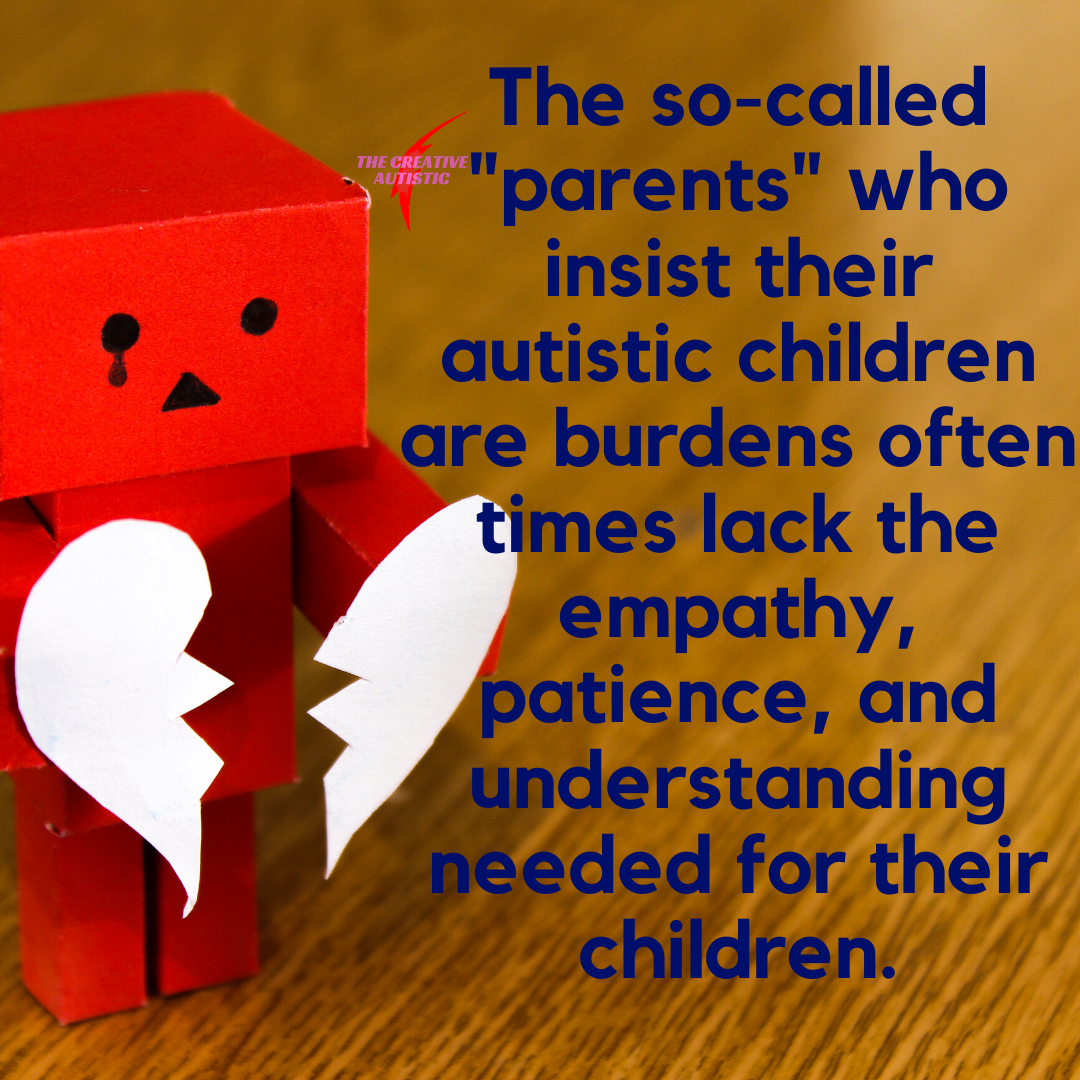 Red paper origami Robot with a sad face holding a white ripped heart in half on a wooden floor. Text next to it on the right in royal blue that reads:

The so-called "parents" who insist their autistic children are burdens oftentimes lack the empathy, patience, and understanding needed for their children.}

Parents, including anti-vaxxers, martyr parents, and uninformed NT parents try and claim to be part of our community. I notice how people tend to claim to be a part of something that they cannot identify with, and yet that is part of the problem. Hence...

The Era of Autistic Parents vs. Martyr Parents™

Autism Warrior Parents (Martyr moms as well) do not want to change… and cognitive bias, as well as ignorance is a choice.
~
Autistic Advocacy is not for the faint of heart.
It absolutely hurts. It really sucks, when parents want to battle autism as if we’re “burdens” to society. People do not understand, specifically why, at times we have a harder time managing our mental illness. I know that it is because environmental stressors and other people (aside from ourselves) do actually cause stress, depression, etc. Parents are so quick to judge us about who we are and make opinions and assumptions, instead of directly asking us. Even when we don’t verbalize language, reach out to these parents when they are asking for help in time, etc., it is never seemingly enough. I feel like lately my advocacy has been taken much for granted. At the same time, I recognize that there have been times where I have been impatient; however, impatience around those that actively choose to be ignorant is why I cannot play this never-ending game anymore of proving who I am to people anymore.

The martyr parents aren't autistic, therefore they are unable to identify with the minority group label. They may have children who are, but it does not mean that they are. The same goes for professionals. They are not the "experts". I’m frustrated and disappointed with people who think that the only way they can raise us is by teaching us to follow their standards of normal behavior. Whatever normal even means these days to me can get quite confusing sometimes. I try and blame myself for what happens in conflicts, still (unintentionally), and even though, there are two sides to every story, I also get the person who is ignorant lecturing me. Parents ruin our self-esteem on the spectrum when they refuse to listen to advocates and then call their autistic children burdens. It is a fact of the matter, a traumatic, painful experience. In my advocacy, I have not been perfect, simply because no one is when they advocate. Instead, I am taught by others that this part of me is some god awful thing and should be fixed and cured. And you know what? It is 2020. I am so done with willfully, intentionally, ignorant parents that complain about their autistic children. If you have a child, of course, that is going to be a hard thing to raise and take care of them. And you (reader) may complain at times, no doubt, as no one is perfect. I’m not referring to the past two sentences. I am talking about parents that complain and publicly humiliate their children on social media, etc. nonstop.

It breaks my heart to see so much hatred towards autistic children. And no, Inspiration porn is not the only issue; rather, I am heartbroken because parents these days would rather abuse, change, fix, and obsess over what is “wrong” with autism, rather than accept what cannot be changed. I am not a burden. Autism is not an easy thing. Nor is being a parent. But to sit there and complain about your child, as if they are the problem due to something they were born with is not helping the situation. Parents, look I get it. I have sympathy. Kids are not easy to raise, and kids are also a pain at times. Instead of publicly putting your own personal views of your child on the Internet for the whole world to see, ask yourself how your child would feel if he/she/they saw what you posted? Even more: let’s say, hypothetically, you were autistic and your parents were talking about you like you’re some tragic case that is meant for empty tissue boxes. How would you feel? It is much easier to complain about others than to listen. Autism is a complex disability and there is no denying this. Now, there is a difference between complaining to a therapist, or one person individually for comfort and support (as well as your spouse). Here are some great options for you to handle the situation instead of going online:
But please do not post negative things about your autistic children online. Nor should you constantly complain about your child. This isn't appropriate. We all have our own paths. The Internet isn’t a safe space for information, because technically anything posted online is public. Complaining about your autistic children all of the time only does more harm. We’re not suggesting you do not complain; you’re allowed to be human. The problem is when it is constant and apparent, with the persistent rhetoric of sayings like:

“My autistic child is such a burden!” or

“My autistic child is such a burden to our family.” or

“My autistic child deserves to be cured and not accepted!”

The list could go on. The above lists I made gives you, reader, options to consider. I see even non-willfully ignorant parents who are not anti-vaxxers posting things about their children on the internet without their permission. Ask yourself, reader, if you feel as though you think you have the right. I ask, one more time. How would your child feel if he/she/they read what you wrote? How would you feel if they saw it? How would you feel if someone did this to you? Behavior, according to most philosophers, is a social construct. And yes, behavior IS actually a way to communicate with a person. Autistic behavior is not bad. We understand that *some (not all) autistics can be violent. But instead of understanding why or how that is the case, *some parents take things personally and do not care. Let’s look at a hypothetical situation:

Next, we have to discuss the tension right now. There is a lot of tension between autistic moms and martyr parents™ The martyr parents are complaining about their children all of the time, while autistic parents are asking them not to. And it is not about who is right or who is wrong. There is a lot of willful ignorance sitting inside of these parents’ minds, and it will only get worse as time goes on, unless everyone else stands up to the hate with us. I’m not hating these Martyr parents™, but I am concerned for the autistic community because we advocates have been working so very hard just to educate people on why we deserve our own rights in society, just like everyone else. Parents are part of the problem. I’m not suggesting that ALL parents are part of the problem, but parents, as we know it (unless they are autistic), are not autistic. Therefore, they are more privileged in that regard. They do not face the stigma of being autistic every single day. And some even believe in the stigma and abuse their children.

Communication and Interactions: The nonverbal, unmentioned social-cultural expectations from autistics

Autistics and NT's do not interact in the same ways. This does not give room for people to suggest that autistics need to mold who they are to become neurotypical. Teaching them to mask only destroys their mental health. There is a nonverbal understood level of expectations by NTs, but autistics have our own expectations, culture, and socialization. Autistic people are information-based communicators; we prefer information, special interests, and any non-detailed ways of verbal communication. Yet, oftentimes society rejects these valid forms of interactions within our identities, even though therapists promote them. Non-speaking autistics have a need for NTs to adapt to AAC devices, sign language, and other ways of non-verbal/non-speaking forms of communication, such as writing. This is not black and white because autistics all are different. Just because someone may be verbal, it does not necessarily mean that they don't heavily rely on non-verbal communication for needs. Just because someone is non-speaking, it doesn't mean that they are entirely non-speaking. We also expect NTs to understand that we are literal thinkers. The autistic brain and processing occur much differently than the NT brain. This is because everyone else without processing disabilities will not process the information being given at multiple speeds in the same ways. Unlike the NT brain, autistics process information in our environments through different focus points. Hyper-focusing allows us to think quicker through conflicts, resolutions, and it occurs when the environment is very much accommodated. Hypo-focusing may occur when we are unable to use as many "spoons" as we had before something occurs that may deplete the spoons. Spoon theory is one analogy to represent this. Autistics also need our autonomy to be accepted. This means that we don't communicate in the same ways. Below is an organized list and ways to unlearn problematic biases due to ableism:

1. Communication:
2. SPDs (Sensory Processing Disabilities) are complex in nature, but they are often dismissed. Below are examples of how:
3. Consent and masking; why it isn't heard and understood:
4. Regulation, Alexithymia, and Empathy, and how it's misunderstood:

5. Autonomy and how it's not accepted:
Neurodiversity involves the acceptance of the autistic person. Parents cannot get PTSD from autism individually itself, and this is a misconception I keep seeing in parents, as well as professionals. The condition itself does not medically cause PTSD. These parents may get PTSD from their parents and pass the abuse onto their children; however, autism itself (the condition) does not cause PTSD. Autistics can become abusive due to the ways in which they were raised, but not because of the disability. Yet, parents will label autism as a "burden", as a "problem" all because they do not reach out to the autistic community for help. Neither do professionals. Autism is misunderstood by parents, and society is to blame for the misinformation. I also know what it's like to grow up with parents who do not accept us, even after advocacy and education. The best thing to do is to embrace the fact that someone's cognition is different, and the way they process things emotionally, not just cognitively, will be different. What is needed is compassion and a listening ear. Neurotypicals tend to dismiss autistic voices, but both autistic people and Neurotypicals need to listen to each other, as autistic people do not lack empathy.

Professionals who do therapy to teach parents that their kid's autism is a burden is not only harmful to the autistic child; but, further perpetuates stereotypes. It is the professional who tends to label themselves the "expert" of a population that they are serving, and this mindset does not help the client. Parents need to put themselves in the learning role around autistic adults when it comes to their children. They need to meet us in the middle, and their child in the middle. We cannot always accommodate NTs. That is not realistic. 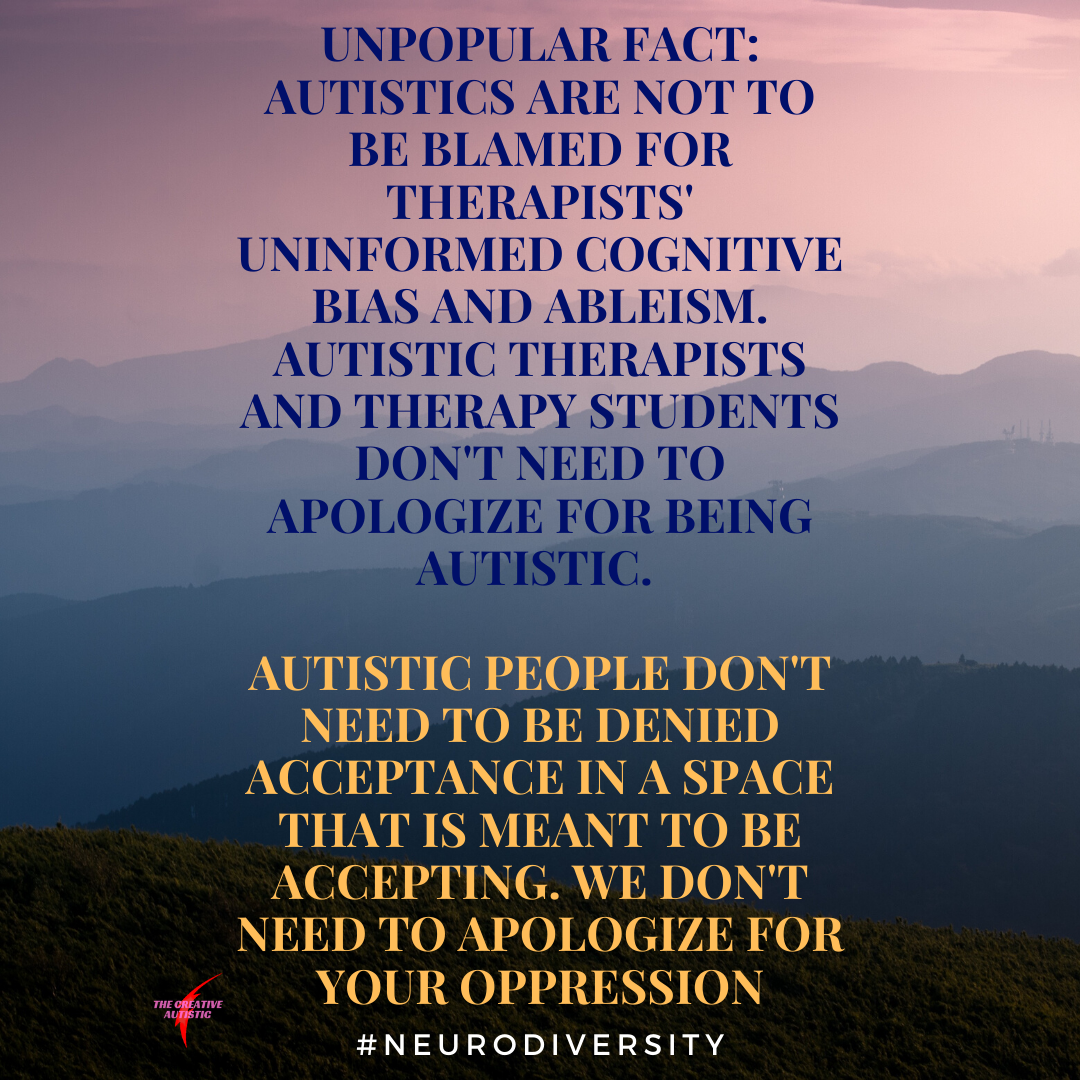 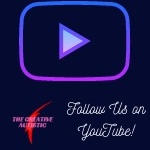